It is not necessary to justify how important a radio signal meter is for a radioamateur, especially when entering the frequency ranges above 1 GHz. There are inexpensive meters available on the market (EXAMPLE), but you can do better by yourself 😉 using an inexpensive module with the Analog Device AD8318 IC. The schematic is simple: 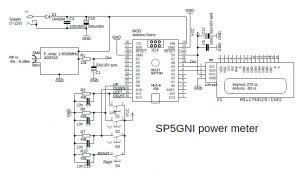 Using the printed circuit board from my GNI-r5 rotor controller, it took me 2 hours to assemble. Worse with writing the program, it quickly turned out that this could not be done as soon as it seemed. Fortunately, I remembered that I saw a similar solution, I located that in FUNKAMATEUR 1/2018. I wrote an email to the author of DC5ZM, and after 2 hours I got from Reinhardt the source code for Arduino (thanks a lot!). It took me half an hour to adapt the program to my hardware and I have a new toy! In fact, without such a device you can not run equipment such as for the QO-100 satellite. 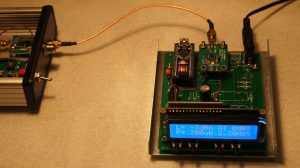 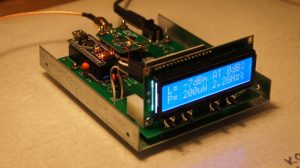 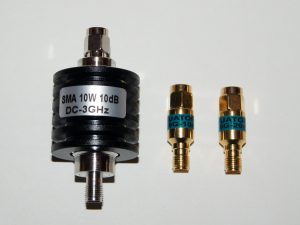 A dual meter would be much more convenient for measuring the standing wave ratio (SWR) and return loss. Reinhardt DC5ZM also developed dual meter using two modules with AD8318. I have made such a meter (see photo below), its description can be found in the Polish magazine Świat Radio (1/2020 p. 45). 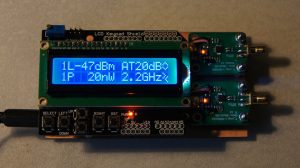 The DC5ZM made his meters using Arduino Uno with the Shield LCD 1602 overlay. If you are interested, I can provide source codes for each of the three versions.

I would like to check and possibly calibrate the meters using a professional RF generator.

Based on a dual power meter, I have assembled the SWR measurement system as in the photo below. As a signal source, I used the construction of F1CJN – a generator with a module with the ADF4351 board and Arduino Uno with Shield LCD 1602. Directional couplers are available in large quantities and various couplings on Chinese auction sites. I bought 2 pairs for very little money: 20 dB and 40 dB. 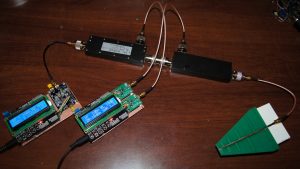 I measured a broadband antenna bought in China. Its construction is similar to a log-periodic antenna, according to published data it is supposed to run 1.35 GHz-9.5 GHz, 5-6 dB gain, max 15 W. Below are results in the range 2200-2500 MHz .. 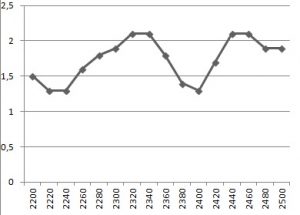 Such a system is subject to high measurement uncertainty due to the adapters, unknown cable and coupler characteristics as well as structural simplifications of the signal source and power meter. I asked my close friend Mariusz to measure the same antenna with professional equipment – see below. 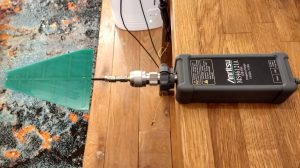 The result looks nice, but it is also not fully reliable, because it actually includes measuring the antenna system with two adapters. Calibration with a certified artificial load was also not performed. 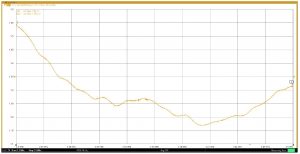 I made a number of measurements in my system in various combinations of 20 and 40 dB couplers, with additional attenuators, with different cables, etc. It seems to me that the most reliable result was obtained for setting as below for both 40-dB couplers. It is important that the forward wave coupler is located on the generator side. The measurement result in the 2.2-2.5 GHz range differs in details from both my first measurement and from Mariusz’s. However, all measurements indicate a minimum SWR around 2.4 GHz, and this information is most important to me. This confirms the usability of this antenna to transmit in the direction of the Oscar-100, even if you lose 3 dB, because it is NOT a circular polarized antenna. 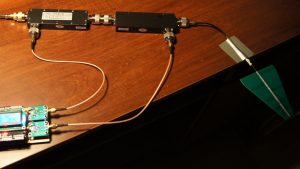 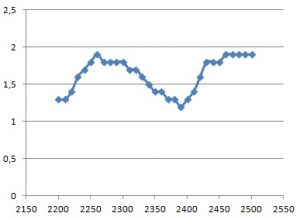 For regulation of systems, especially antennas for the minimum SWR, the analog meter is more convenient. As Zygi SP5ELA suggested – if we have two analog signals proportional to the logarithm of the forward and reflected power, then the signal generated after subtraction will be proportional to their ratio. The use of a differential amplifier connected to the ADS8318 outputs in the above-described dual meter allows the use of a analog meter, the indication of which will be the BIGGER, the lower the reflection coefficient. Diagram of such a system: 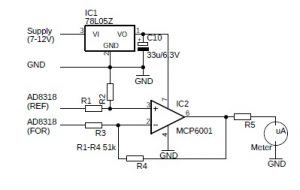 A “rail-to-rail input/output” operational amplifier was used here. The value of the R5 resistor should be selected according to the sensitivity of the meter. System tests, where three SWR cases were simulated using the SMA generator and attenuators, are shown below.

Rafał SP9VFD shared with me the information on how he made his version of a dual meter to be used in his constructions in the microwave 23cm, 13cm, 9cm and 6cm bands. Rafał decided to use the Arduino Uno R3 module with a different, newer Keypad Shield V2.0 overlay. The Arduino module with the overlay was placed in an acrylic housing, while two AD8318 modules were placed in an aluminum box. The housings have been bolted together to form a friendly, compact whole. There is still a lot of space in the aluminum housing, you could place a small battery there to power the whole thing and use it in the field.

It turned out that the Keypad Shield V2.0 overlay is not compatible with the older version. The resistors in the analog button coding circuit have different values. Rafał edited the DC5ZM codes and matched them to the new overlay. The keys now work properly on both versions of the meters – single and dual AD8318. It was necessary to change the values read by the ADC converter on pin A0. Photos from its implementation below: 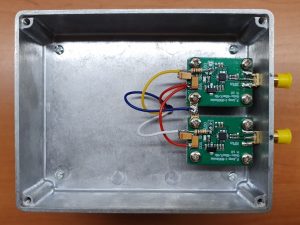 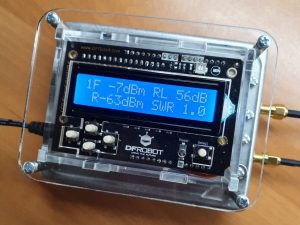 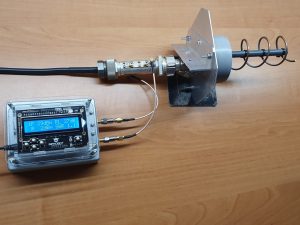 Rafał SP9VFD also made his version of a signal generator with a module with the ADF4351 chip, Arduino Uno with the Keypad Shield V2.0 overlay. As with the meter, the construction software according to F1CJN had to be slightly modified due to different resistor values. With such a generator, a double power meter and a Kathrein coupler, Rafał can finally make measurements in the lower microwave range. 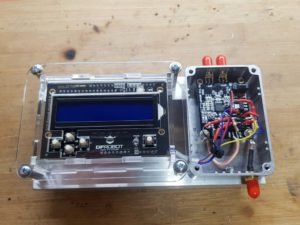 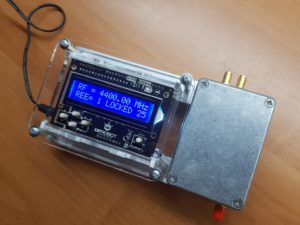 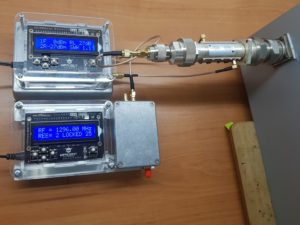 For those interested, I can provide the source codes of each of the three previously mentioned versions, but also two versions of the meter and the version the F1CJN generator corrected by Rafał SP9VFD.