The original documentation of the ATU-100 tuner can be found on the Github portal as well as elsewhere (example). The schematic diagram can be found on our website https://hf5l.pl/pdfs/.

Using the experience gained and left components, I decided to mount the extended version of the N7DDC (7×7) for the 1.8 -50 MHz range. After solving the problem of how to solder the SMD processor and making the coils, the assembly was easy. To program the processor on the board I used the PIC Kit2 programmer (too big time constant in the MCLR circuit – replacing the C20 capacitor with 10nF solved the problem). I have downloaded the latest version 3.0 available. During programming in accordance with the N7DDC instruction, it is possible to change some EEPROM memory cells. To adapt to my needs, I set the appropriate capacitance values, the appropriate I2C address of my display, automatic tuning activation, and the minimum power value (5W) and the maximum value (65W) required to activate the tuning. Board with OLED 128×32 display was placed directly on the programming pins. The hermetic Kradex ZP150 housing with a transparent cover was ideal for this construction.

Power to the system is supplied via the same cable as the RF signal to the UC connector. The voltage of 12-13.8V passes through the visible 220uH/2.5A toroidal coil and the 8.2uH series choke, and the RF signal through 5 x 10nF/3kV and silver plated wires to the tuner input.

I had the opportunity to perform the next ATU-100 7×7 tests while working with the away QTH in Bieszczady mountains. I was there at the beginning of September 2020, taking advantage of the hospitality of Marek SP5MNF, who lends a house in Solina at the disposal of visiting hams (and not only). The tuner was attached to a section of a copper pipe driven into the ground. I supplied RF+DC power using the RG-58 cable, 10 m long. The ground output of the box was connected to 5 counterweights of different lengths. A copper wire, about 20 m long, hung on trees at a height of 3-4 m, as shown in the photos below, served as the antenna. 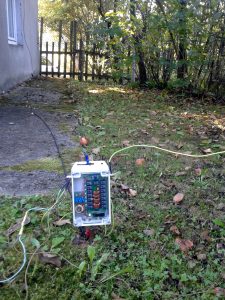 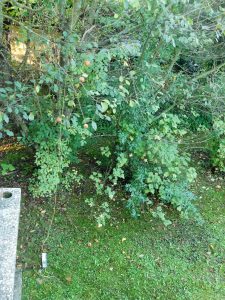 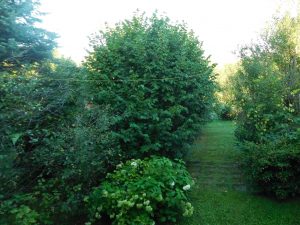 Based on my experience, I can confirm that the ATU-100 is an excellent device.