Arduino is a favorite toy for electronics enthusiasts. There are thousands of designs around these modules. Here’s the next one – the simplest and cheapest SDR receiver in the world!

A “real” SDR radio is one where the RF signal received by the antenna is directly sampled by an analog-to-digital converter. Further processing of the signal takes place on the sequences of “ones and zeros”. However, other devices that use digital signal processing also fall under the SDR category. An example of this is the uSDX-RX receiver shown below, capable of receiving AM, FM, SSB (single-sideband modulation) and CW (telegraphy – Morse code) signals in a wide frequency range. The circuit is so simple that it can be quickly assembled on a universal PCB or on a prototype breadboard. 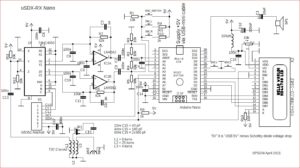 The input antenna matching circuit consists of 3 windings wound on a ring core, the middle of which is a resonant circuit, adapted to the selected operating frequency range. Theoretically, the circuit can be omitted and the antenna can be connected directly to the capacitor C13, but at the cost of significantly deteriorating the reception quality.

Our system is a direct conversion receiver – directly from radio frequency to audio frequency signal. It is utilizing the readily available 74HC4053 chip as the famous high performance Quadrature Sampling Detector, also known sometimes as the “Tayloe Detector” or even “I-Q Mixer”. In fact, these are 2 mixers, which are keyed by signals with the receiving frequency, but shifted in phase by 90 degrees. 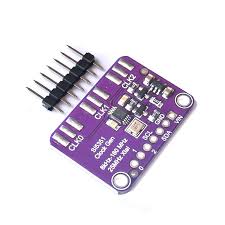 The CL0/CL1 keying signals are generated in a popular and inexpensive module containing the Si5351 frequency synthesizer IC, which is controlled from the microcontroller via the I2C bus.

The output signals from the detector, after amplification and bandwidth limiting by the IC1A/B dual operational amplifier, are directly fed to the inputs of the ATmega328P analog-to-digital converter in the Arduino Nano module. There are several types of dual DIL-8 amplifiers on the market, the LM4562 shown in the diagram is a low-noise amplifier, just like the LT6231. As a last resort, the readily available NE5532 can be used, but it will work in non-catalog conditions.

Further processing of the signal takes place exclusively in the digital domain, which is a remarkable achievement given the seemingly limited capabilities of the 8-bit processor. The ATmega28P samples the ADC input at a 62kHz sample-rate, an decimates this high-samplerate to a lower samplerate, performs a phase-shift by means of a Hilbert-transform (constant phase shift independent of the component frequencies – very difficult to implement in an analog circuit), summing the result to obtain side-band rejection; it subsequently applies a low-pass filtering, AGC and noise-reduction functions. The receiver circuit does not have an analog headphone amplifier – a digital output with pulse width modulation (PWM) is used. The audio signal is strong enough, even a small speaker with an impedance of 8 ohms can be used.

The Arduino module additionally supports a 2×16 character LCD display, buttons and a rotary encoder (pulser with a switch). The entire receiver is powered via the USB-mini connector from a computer or telephone charger with USB output.

Where did the idea for this receiver come from? It goes back to the products of the company “QRP Labs” (QRP in the amateur radio code means “low power”). This company specializes in low-power transceiver kits for self-assembly. On the basis of a very successful transceiver called QCX, the Dutch radio amateur Guido (PE1NNZ) came up with the uSDX project, in which “what could be done” from the analog QCX circuit was transferred to the digital domain of the ATmega328P processor. Source codes (open source), detailed principle of operation and uSDX documentation are available on GitHUB: https://github.com/threeme3/QCX-SSB and https://github.com/threeme3/QCX-SSB/tree/feature-rx-improved . In a short time, the project found many enthusiasts gathered in a group on the forum: https://groups.io/g/ucx .  The project is under constant development, in various variations and versions. My receiver is mainly based on Manuel DL2MAN  and Miguel PY2OHH solutions. My direct inspiration was reading the article “QRP uSDX Transceivers” published in Polish magazine “Świat Radio” No. 2/2021.

The source code used in my uSDX-RX receiver is QCX-SSB_1_02n.ino. In order for the program to work on a standard Arduino Nano, it has been slightly modified. I only changed 4 lines:

After programming the module in the Arduino environment (Nano – Atmega328P – Old Bootloader) and placing it in the socket of the assembled receiver, first set the display contrast using the 10k potentiometer. There are 3 buttons to operate the radio: left L, right R, ENC encoder button and a mechanical rotary encoder (the encoder button can be doubled with a micro-switch, which requires much less pressure and is more convenient to use). The buttons have the following functions (x means press, 2x double press, d long press):

Some of the Menu functions listed below (L x – short press of the left button) are intended only for the transmitting part – do not use them!

So in short – tuning can be done by turning the rotary encoder. Its step size can be decreased or increased by a short or long ENC press. A change of band can be done with a double ENC press. The mode of operation is altered with a short press on the right button; a double press on right button narrows the receiver filter bandwidth, the bandwidth is reset every time mode is changed. The volume is changed by turning the rotary encoder while pressed.

The receiver can be used for various types of radio emisions, including AM broadcast stations (in this case it is better to use LSB/USB mode than AM). It can be continuously tuned from 100kHz to over 50MHz. Undoubtedly, the most interesting for listening sessions are SSB contacts in amateur bands. In conjunction with a computer, it can also be used for digital modes such as FT8, JS8, FT4.

Our receiver, however, is an experimental solution and a number of limitations resulting not only from the simplicity of construction should be taken into account. The most important of them is the antenna, usually a wire. The general rule – the longer the antenna, the better. An antenna with a length of at least a quarter of a wave should be considered as long enough (e.g. for an amateur band of 3.5 MHz, i.e. 80m – it will be a 20m wire). As mentioned above, theoretically the antenna can be connected directly to the detector input through the capacitor C13. In such a case, however, it must be remembered that apart from the desired signal, we supply not only the full radio spectrum to the receiver’s input, but also all the noise and interferences that the antenna “collects”. Therefore, a selective circuit to match the antenna to the receiver input is very advantageous. Of course, the best is a half-wave dipole antenna with a coaxial cable, but it is more expensive, more difficult to make and, by definition, narrowband.

Our diagram shows an example of a circuit adapted to the three most popular amateur bands: 20, 40 and 80 meters. The transformer is very easy to wind on the popular T37-2 ring core. The windings should be wound using a coil wire 0.2-0.4 mm or wire in insulation (e.g. kynar as in the photo below). You should start with the L2 winding – it has 25 turns (i.e. 25 wire passes through the center hole). The L3 antenna winding has 4 turns, and the L1 – 8 turns. The values ​​of the capacitor resonating with inductance L2 for individual bands are given in the diagram. These are indicative values ​​as the optimal capacitances depend on the design and type of the antenna. It is best to choose them experimentally, and you can even use a parallel trimmer or a variable capacitor. In order to change the bands, you can replace the capacitor with the plug-in connector with two gold-pins as shown below, you can also use a band switch or relays. Adjusting the receiver to other frequency ranges is left to the users’ creativity. 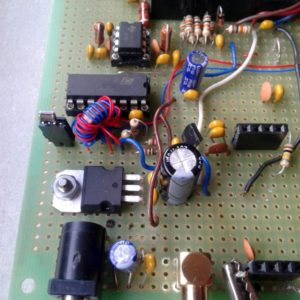 When to listen? Each band has its own specificity resulting from the properties of the ionosphere. In turn, its properties depend on many factors, such as the season, time of day or the state of solar activity. Basic information on radio wave propagation can be found here: https://en.wikipedia.org/wiki/Radio_propagation . In particular, the 80m band is most active in the evening and at night, more in winter than in summer. The 40 m band is in fact active around the clock, by day for communication in local region, by night with the whole world. The 20m band, known as the queen of bands, allows you to listen to very distant stations, usually during the day.

For receive, by default an AGC (1.8 in Menu) is enabled. This increases the volume when there are weak signals and decreases for strong signals. This is good for SSB signals but can be annoying for CW and AM operation. The AGC can be turned off in the menu, this makes the receiver less noisy but require more manual volume change. To further reduce the noise, a noise-reduction function can be enabled in the menu with the NR parameter (1.9 in Menu). To use the available dynamic range optimally, you can attenuate incoming signal by enabling a front-end attenuator with “ATT” parameter (1.10 in Menu). Especially on frequencies 3.5-7 MHz the atmospheric noise levels are much higher, so you can increase the receiver performance by adding attenuation (-13dB).

To calibrate the transceiver frequency, you can tune to a calibrated signal source (e.g. WWV on 10 MHz) and zero-beat the signal by changing “Ref freq” parameter (8.1 in Menu).

Selecting an S-bar (1.12 in Menu), shows a signal-strength bar where each tick represents a S-point (6dB).

For FT8 (or other digital) mode, select one of the preset FT8 bands by pressing the encoder ENC button twice, and plug the headphone jack into your sound card’s microphone jack. Set the volume to minimum and run the FT8 application of your choice (for example WSJT-X).

Inspired by my idea of only RX Arduino Nano based uSDX all, Barb WB2CBA developed his version of all mode SDR Receiver with OLED. Schematic is available HERE and view of the board is shown below. 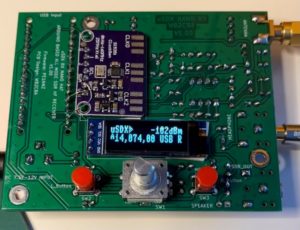 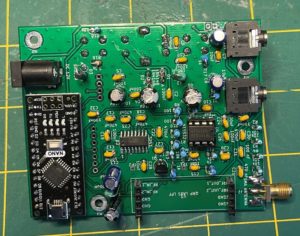 Some quick notes on WB2CBA building: he used QRP Labs LPF filter as LPF filter design to be flexible. OLED display is 128×32 OLED which can be purchased almost from every online site. OLED display, Controls and SI5351 module should be soldered at the back of the pcb on solder side. No need to modify SI5351 module. It can be used as it is. Arduino Nano port 13 has a led which triggers TX on. To overcome this issue in uSDX firmware just replace DIT which is 13 with 11 and then compile, which solves the TX on problem. Also OLED define should be un-comented by removing //. Choose 2500400 define by un-commenting by removing // and comment 2700500 by define adding //.

An interesting solution of the uSDX-RX receiver in the form of an Arduino UNO shield with a 2.23 “128×32 OLED display can be found HERE (schematic and Gerber files).

Have fun installing and using the uSDX-RX! The next step is to upgrade it to a full-fledged tranceiver as shown HERE and on the forum in the group  https://groups.io/g/ucx, but for that you need a ham radio license. There is a lot of information on the web on how to get it in your country.