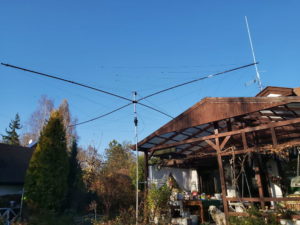 As you know, I have been promoting QRP for many years, also in competitions. Unfortunately, until 2019, working in low-power competitions did not make sense due to propagation on the upper bands. In 2020 already I returned to QRP at CQWW.

Usually, I choose one upper band to sleep at night. And what is important to get a meaningful result? Of course the antenna!

So this summer I started studying my antenna potential on 14/21/28. The Butternut HF5B used was good, although it gave a relatively small gain compared to the InvVee or GP, so the question arose – what to put?

I have lived in a house with a garden for over a dozen years and rejected ideas such as tall masts or trusses. If I did, the antennas would be high and the garden would lose its beauty.

I was browsing the available antennas, so TH3JR and clones, hexbeam and spiderbeam. After a deep comparative analysis and the available place, I chose a spiderbeam of German production. The antenna is expensive as for the pocket of a young retired, but “you live once”!

When the package arrived, I was satisfied with the quality of the elements and started assembling in September. Once again, I was playing like a child. There was a lot of work, especially in understanding the next stages of submission. Despite the well-written manual, I found a few bugs and doubts. Summa summarum antenna was ready on the lawn on a short mast in mid-October. I bought it with unplanned gymnastics among many tubes, lines, wires and binders.

One week left until the competition and a “prayer” for the antenna to fit between the mast and the sloping roof. It turned out that I have a stock of half a meter. It’s good. So the antenna went up and when rotated by 360 degrees, it hit the InvVee arm at 80/40. So we had to move the wire away …

So the choice of the band for the competition is 21 or 14. I chose the 20 m to improve my result from last year. The aim was to get as close to the European results as possible. Target is 300 QSO, 20 zones and 50+ countries.

On Friday I look at the SSN, A and K monitor – it’s great! I chose the non-assited category, I prefer to work in the good old S/P style.

On Saturday, as an early riser, I got up easily at 4 local time, made myself a cup of coffee and turned on the radio. The silence in the air. I’ve always loved that moment when propagation wakes up. And then suddenly I see a signal on the screen (Ftdx101MP) – it’s 9A4M on S9 +. And there is the first QSO in the log at 02:12.

Then silence until 03:30, where to my joy and surprise, stations from South America appeared. A bit unsure if I will make it, I called PP4T and he answered after 3rd time! That’s great, so I turn the knob and count more PY.

The stations with CX and HK can’t hear me, but … At 03:47 I do the first ZL, and then the next. Cheers of joy, respect for the “spider 6m above the ground.
Wow, I won’t get any further!

When the euphoria has subsided, I hear the D4L booming and do it the first time. Here is a digression about the work of QRP in contests, based on many years of experience. It is extremely important to feel the two elements.
The first element is a call as soon as the station arrives and there is no crowd calling out yet. Remember that our signal is weak and there is a chance if we call.
The second aspect is waiting patiently for a top of propagation from a given station. Sometimes you have to call out patiently, and when none of it works, it’s a waste of time. In CQWW competitions, the number of QSOs (especially for 3 points) is more important than the multiplier.

From 04:50 the normal fun started, mainly hunting for multipliers and scoring stations for 3 points.

The antenna showed its value – good front/rear and front/side attenuation, which is important in QRM. Directional gain much better than the 2-element Butternutt. But something did not work … I do not find out to many stations at all, eg JA3YBK, B0A etc. Well, but it’s time to do QSO, not think.

Opening to W/VE quite good – easy at the beginning of propagation, then more and more difficult. I ended the first day with 145 QSOs with the better result than in 2020.

On Sunday I looked at the monitor knowing that a magnetic storm was approaching. It’s not bad – ANN = 103, A = 5, so maybe the band will not go out, as it used to be.

I started at 04:11 doing mainly Russians from Asia. It got nice points. At around 6Z, Europa appeared, and then suddenly, with the antenna at 210 degrees, I heard VK3TJK on the S8. I already want to spin on LP, but the signal weakend at 270 degrees of the antenna. So I went back quickly to 210 degrees and here was the signal maximum again. I was calling out and … YEEEES! Double multiplier nice. However, the question arised – what about my new antenna?

When it got light I took my compass and saw that the antenna was set to 210 degrees, but it was actually 270 degrees! I turned it and in several positions there was still a difference between the pointer and the actual direction of the antenna. Turning north through east and everything was clear – instead of 0 degrees I had 060 degrees. Rotor stopped on end brake. That’s why I didn’t make a call to Japan and China on Saturday.

A quick look at the rotor instructions and you could see that I did not synchronize the antenna and indicator when placing the antenna. Well, I had to live with it until the end of the competition. As the propagation to the far east came, I turned the antenna west, north and north-east, and I passed and BY no problem.

And when I felt that W was about to come out, the antenna was already at 300 degrees, checked with a compass. More than a dozen W/VE stations appeared in the log. Interestingly, Europe was still not very active in this direction. And I was doing my job, a lot of new multipliers, including zones 8 and 9, which appeared for a very short time.

In the early afternoon, the conditions were a bit sluggish and I already had many stations on my log.
I felt tired and knew that I would not reach 300 QSOs anymore. The time for QRP is up, even though I heard many stations on S9, eg A61BR, HZ1TT etc. So I decided to end my activity around 17Z. The last station I called was SP8R for the multiplier. I listened with pleasure to him being called by zone 3, 4, 5. For me he was going to S9, but I didn’t reach.

So I close the station with no regrets and with a healthy throat. This is due to the M1 microphone with memories … hi.

I was satisfied with my result because I scored 3 times more points than a year ago. Of course, the propagation was not much better, but I hope that at least I will be the first in the SP and I will be in the top ten in EU. 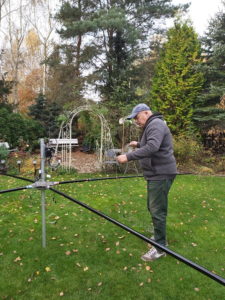