EME communications have fascinated Rafał SP9VFD from the very beginning of his amateur radio hobby, ie since 1991, when he received the first license at the age of 15. At the time, his favorite reading was UHF guide  “Poradnik Ultrakrótkofalowca”  by SP6LB. However, it was only in 2007 that he managed to carry out the first EME contact in the 144 MHz band. Using a set of yagi F9FT antennas 4 x 9 el. mounted on the balcony carried out dozens of QSO EME in the band with the emission of JT65B.

After many years, Rafał SP9VFD decided to return to the EME and the long weekend of May 2019 was dedicated to the assembly of a unique 8 x 23 el. set. of yagis for the 432 MHz band. Antennas Rafał has been building in the garage for the last two months. They are designed for EME operation, but they can also be used for work by satellites and for receiving telemetry data from the moon’s orbit (recently a very development topic). A single antenna was made based on the DK7ZB study and has a gain of approximately 17 dBd at a length of 560 cm. A set of 8 such antennas should give a theoretical gain of about 26 dBd, but in practice it will be lower due to losses on cables and connectors. Rafał checked each of the antennas individually, the DK7ZB design is repeatable while maintaining precision and diligence.

There is still to make 8 connection cables, a splitter, a relay for splitter, LNA and two independent coaxial cables: 7/8 “for TX and 1/2” for RX. The set of antennas will be powered by 8 port splitter I0JXX (8 N sockets and one main 7/16), which is a proven solution. For transmission and reception, Rafał has TS-2000X (QRO is under preparation) and a parallel SDRplay RSPduo receiver. The first rehearsals will be 50 W.

The antenna rotation construction is placed in the antenna trolley. The AZ drive is a solid old-style Żyrardów rotor from the late 90’s that drives a 60 mm tube in the thrust bearing. At the end of the pipe, an EL rotating mechanism is welded, using a cross beam, two solid steel hinges and an 24 inch electric actuator. The whole structure is made by Rafał himself. The 14 m mast was made over 10 years ago for directional HF antennas. Temporarily to control the rotation, Rafał uses the old SAK232 controller for AZ, and Datcom 500controller  for EL. Ultimately, Rafał wants to perform comprehensive autonomous control based on the Arduino project. 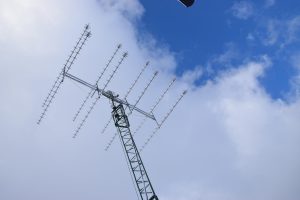 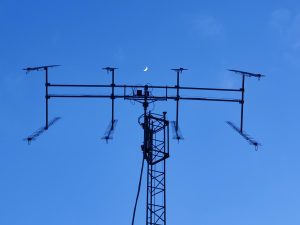 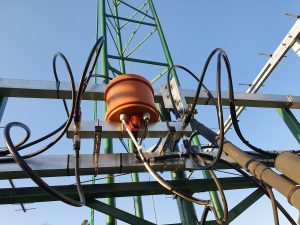 Weekend 19/20 October 2019 was a breakthrough for Rafał SP9VFD. For the first time he participated in the ARRL EME Contest!

After completing the 8 x 23 el yagi set for the 432Mhz band, Rafał finished the construction of the SSPA 400W for this 432 MHz band. He decided to start in the random mode only on CW on a manual electronic key without Internet assistance. He only supported the SDRPlay parallel receiver with the EME 432 MHz band preview on the computer monitor. He worked during the orbit from Saturday to Sunday. For the first 2 hours nothing was heard, then the conditions improved and for the first time in his life he began to receive his own echo on CW! He made the first contact with I2FHW without much problem. He called I2FHW several times on CW, not quite believing that he would answer. First he heard QRZ? And then his callsign and OOOO. He replied RO to what he got RRRR. In total, Rafał did 14 contacts (12 stations)  in the contest: I2FHW x 2, DL7APV, SM2CEW, SM6FHZ, G3LTF x 2, UT5DL, DK5OZ, OZ4MM, OK1CA, PI9CAM, DL9KR, SP6JLW.

After the results were announced by ARRL, it turned out that Rafał was 4th in the world in the SO 432 MHz CW only category. As he stated: “I was not focused on any result because it was my first start but I am glad that the system I built proved to be successful in my first EME competition and it was on CW”.

In February 2020, there was a DUBUS EME CW / SSB 144MHz / 432MHz contest. During this competition, Rafał worked again as SO 432 MHz CW, but he was active only for a few hours. On Saturday, during the second orbit, he had a serious relay failure close to splitter. Despite the short time and failure, he managed to make 10 QSOs. All contacts were random (no appointment or internet assistance). QSO list: UA3PTW, ES5PC, OH2DG, WA6PY, SP6JLW, DL6SH, SM2CEW, SP7DCS, DK3WG, DL7APV. Rafał SP9VFD took 8th place in his category.

Rafał, congratulations! We wish you not only successful Earth-Moon-Earth QSOs, but also Earth-Mars-Earth HI HI!