For many years I have the pleasure to work with Mirek SP4MPG and compete in his contest station located near Olsztyn. I met Mirek thanks to the SN0HQ Team and joint, annual starts in the IARU HF competition. This year, on the last weekend of May, I decided to start in the CW part of the CQ WW WPX Contest. Fortunately, coronavirus restrictions were already lifted in many respects, and I was at home for a long time, so leaving was possible without danger.

I use the N1MM + program to work in contests. Preparing for the start, I entered into the log data from 5 years ago to compare myself with my record log during this year’s start. The “Goals” option allows this.

At the SO4M station for 20 meters band a 2x6el Yagi set is available. The lower antenna, located at a height of about 20 meters above the ground, is directed permanently to the USA. The upper antenna is rotated and is located about 35 meters above the ground. Of course, the stacking system has the ability to switch: you can use two antennas simultaneously, only the bottom or only the top. In addition, I work with two FT-1000MP transceivers connected by a MicroHAM u2R switch to work even on one band. This switch is primarily intended for multi-band operation of SO2R (Single Operator 2 Radio) type. In single-band operation, we use a switch to connect a second TRX, which is used only as a receiver: a low-suspended (about 6 meters above the ground) 3-Yagi antenna is fixed to the south, connected to it.

So while listening to headphones you hear two radios: one on the left and one on the right. If necessary, you can use the u2R to switch headphones to listen to only one radio in both headphone speakers – this is how you work when, for example, there is propagation to North America and there is a high rate: then there is no need to listen in the south direction. In turn, during the day, when most of the contacts are Europe, the situation is completely different. Basic antennas, long Yagi, are usually directed either west or east. This means that low power station signals coming from the south are effectively cut. That is why a so-called “Southern antenna” is needed – to hear these signals. In addition, sometimes on the main radio you listen to two VFO simultaneously (when you want to make a multiplier, at the same time they do not lose the frequency at which CQ is performed). So sometimes you listen to three signals at the same time – even with single band operation. 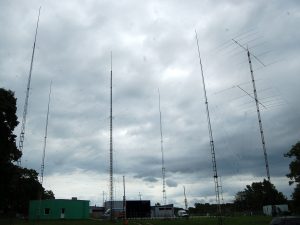 Antennas are shown above. On the right is a mast with 2x6el Yagi antennas for 20m band, and in the foreground an 80m antenna (3el vertical with switchable directions) is visible. The 80m antenna is also switchable to the 160m band, where it works as a vertical. The Yagi 3el antenna for the 40m band is located on the right – it is not visible in the photo. 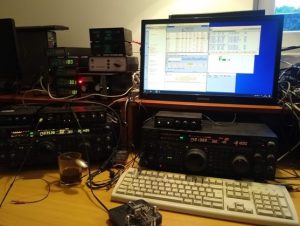 Operator shack: the left radio is an auxiliary TRX with a “southern” receiving antenna connected. The MicroHAM u2R switch stands on this radio. On the right is the main TRX. RigExpert (CAT and CW) stands on the main TRX. On the left side of the monitor you can see switches from Yagi’s phased array arrangements, and next to them antenna rotation controllers.

Course of the contest

The contest started more or less like five years ago. The K Index was 1 – which was excellent. Propagation towards North America (NA) was very good. Each of the first six hours gave a rate exceeding 100 QSOs per hour, with the best second hour: 139 QSOs. During the day, in turn, there was a very decent opening to Asia. Many stations from UA9, Japan and other Asian countries (9M2, BY, HS) and close Oceania (YB, 9M6) entered the log. The number of stations from China is increasing every year. In the meantime, of course, many stations from Europe and a number of stations from VK and ZL.

Unfortunately, around noon the K Index rose to 3 and it was immediately felt. On Saturday afternoon I expected more openings to the USA and Canada, and in the meantime there were few DX stations, and quite a lot from Europe. Sometimes I eavesdropped on stations from the Balkans and heard them correspond to US stations, which I can’t hear at all. In addition, for a certain period, even if the stations from the USA responded to CQ, then only with the antenna turned 270 degrees (and not 300). This is quite a common phenomenon when the magnetic conditions in the atmosphere are disturbed.

However, this was not the end of the problems. On Saturday, around 20 UTC time, a power amplifier failed. It took about two hours to repair – fortunately the fault was not serious. Here a huge thank you to Mirek SP4MPG for quick response and help.

After this forced break, when I appeared on the band the conditions were even worse. Not many stations responded to CQ, the signals were clearly distorted, and better results were obtained when searching for new stations. The rate was maintained at 30-50 QSO per hour. At 01 UTC I took a one-hour nap break. In WPX competitions, stations with one operator can work a maximum of 36 hours (from 48 hours of the entire contest), so breaks should be taken during periods of the weakest propagation. When I appeared again on the band, I could only hear the West Coast stations: W6, W7, sometimes W5. The KL7 and KH6 stations also entered the log.

On Sunday during the day there was no such openness to JA as it did on Saturday. Japanese stations’ signals were much weaker and JA stations were generally few. During the day a lot of stations from Europe entered the log and from time to time DXs from different directions in which I turned the antennas.

During the day the K Index fell to 1 and propagation conditions were stable again. In the evening and at night stations from North America could be heard again. For about an hour I kept the upper antenna in the direction of 240 degrees and worked on two antennas. There were a lot of stations from the USA/Canada and many new multipliers from South America.

During the competition I saw that in terms of the number of QSOs everything was similar to the 2015 competition, but when it comes to the result it was unfortunately worse. As a result, I could not improve the result five years ago, although I made even a little more contacts. In the table below I compare the result from 2015 (reported) and this year’s

The comparison shows a clearly lower number of points for QSO. In WPX coontests, DX contacts are scored higher, so this is crucial: in the 20 meter band, DX contact gives 3 points, contact with Europe is for one point.

I analyze the contacts log after each contest. I use the SH5 program for this, whose author is UA4WLI. The SH5 program, based on the Cabrillo file, generates many useful statements and statistics. Here a lot says comparing the quantity of QSOs with individual continents:

In this table, the number of contacts from NA and EU is particularly noteworthy. This year I have established 262 QSO less with North America and at the same time 245 QSO more with Europe.

Contest is not everything

As for the Mirek’s SP4MPG station, as important as the competition is always the opportunity for me to meet and talk on various topics, not just amateur radio. In the place where the SO4M station is located lives a family (Mirek permanently lives in another place), with whom I made friends. Bożena, the host of the house, is always a great help and thanks to her I go through every competition with something to eat and drink. Knowing myself, if I would not care of myself during the competition, I would probably eat a small amount of meals.

On Sunday noon an interesting event took place during the contest.

The station is located in a rural area, and there are a lot of meadows around. Olsztyn is close, but at SO4M station there is peace and clean air. At the mast with 20m antennas there are hives, where a friend beekeeper with Mirek breeds bees. Some time ago I bought a few jars of this radio-honey. It was great.

Bees swarmed on Sunday. The swarm flew into a place clearly visible from the shack window. A cloud of bees appeared. At some point, the insects began to fly very nervously, and after a few moments they formed a swarm of clusters on a bush almost opposite the window. Later it turned out that there were two independent swarms: the second formed a swarming group on a tree near the fence.

Although I had a fairly good rate at the competition, I had to take a break to see this amazing phenomenon of bee colony up close and take a quick picture with a mobile phone camera. 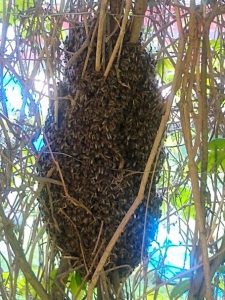 Many thanks to Mirek SP4MPG for excellent atmosphere, cooperation and opportunities, for Bożena for the support during the contest and for my XYL Magdalena and daughter Weronika for supporting my contest passion! 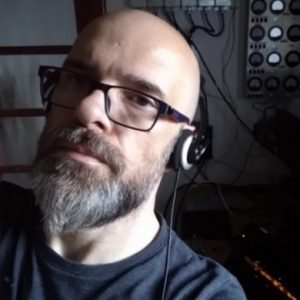